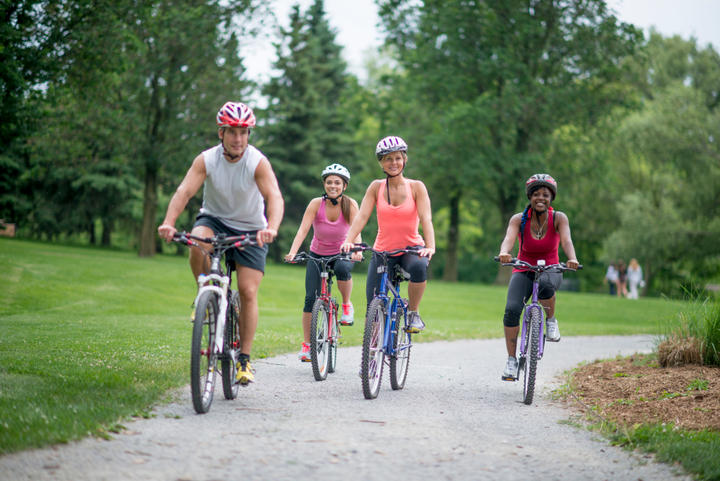 Fargo residents are increasingly bicycling whether it's to commute, for exercise or for fun. Bicycle safety is important to reduce the risk of injury in the event of an accident.

Every bike ride begins with putting on a helmet. But it’s equally important that you ensure a proper fit so your helmet can best protect you.

Size can vary between manufacturers. Follow the steps to fit a helmet properly. It may take time to ensure a proper helmet fit, but your life is worth it. It’s usually easier to look in the mirror or have someone else adjust the straps.

Be prepared before heading out.

Drive predictably so motorists get a sense of what you intend to do and can react to avoid a crash.

Drive where you are expected to be seen, travel in the same direction as traffic and signal and look over your shoulder before changing lane position or turning.

Avoid or minimize sidewalk riding. Cars don’t expect to see moving traffic on a sidewalk and don’t look for you when backing out of a driveway or turning. Sidewalks sometimes end unexpectedly, forcing the bicyclist into a road when a car isn’t expecting to look for a bicyclist. If you must ride on the sidewalk remember to:

Every person riding a bicycle upon a roadway shall be granted all of the rights and shall be subject to all the duties which may be applied to the driver of a vehicle by the laws of this state declaring rules of the road applicable to vehicles or by the traffic ordinances of this city, except as to special regulations in this article and except as to those provisions of laws and ordinances which by their nature can have no application.

No person shall operate a bicycle at a speed greater than is reasonable and prudent under the conditions then existing.

The driver of a bicycle involved in an accident with another bicycle, motor vehicle, or with a pedestrian, shall immediately stop such bicycle at the scene of the accident and shall give his name, age and address to the other person or persons involved. He shall also give immediate notice of the accident to the police department and shall file a report with the police department regarding the accident. In the event said accident is investigated at the scene by the police, it is not necessary for the driver to file an individual report.

We have found that in the vast majority of bicycle thefts, bicycles were either unlocked, improperly locked, or locked with inadequate locking devices, such as lightweight cables or chains, or low-quality U-lock devices. You should always carry a secure lock whenever you plan to leave your bicycle unattended. The "U"- shaped locks have proven to be the most effective, but like all locks or chains, they can be defeated. Use a high-end "U"- shaped lock to reduce the chances of the lock being defeated. You should also exercise care in where and how you lock your bicycle.You should always lock your bicycle through the frame and both wheels to a bicycle parking rack, preferably a rack with a thicker frame. Lock all free parts of the bicycle as well or take them with you. If you lock only the front wheel you may return to find only the front wheel. Leave your bicycle in a visible, well-lighted area. Avoid leaving your bicycle locked outside overnight.

Thieves are often creative in their approach-if they are unable to steal the bike, they may try to take any valuable parts. If left unattended for long periods (overnight), secured bicycles may get their unsecured parts stolen. The thief will secure his/her older bike to a more expensive bike that is parked in a rack or other area. The thief will wait until later in the evening when the area is clear and the victim has grown tired of waiting and has exhausted all ideas on how to locate the owner of the other bike or remove the lock. When the victim leaves in exasperation, the thief will then take all that is unsecured, tires, pedals, lights, speedometer, etc. Missing parts can average between $300-$500 or more depending on type of bike and parts taken.

The Fargo Police Department no longer issues bicycle licenses; however, residents are encouraged to register their bicycles through the My Property program. The online program allows you to create an account, enter information about your property such as serial numbers or pictures, and later retrieve the information if you become a victim of theft or other loss, such as a fire.