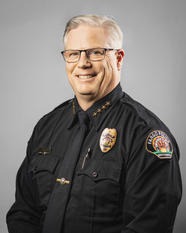 Chief David Zibolski was appointed as Fargo's Police Chief in October 2020. Zibolski previously served as the Chief of Police in Beloit, Wisconsin. During his tenure in Beloit, he led major organizational change within the department and its community that positively affected leadership and culture, strengthened community relations, and saw the integration of progressive technology and best practices, while making Beloit a safer city.

Zibolski began his career with the Milwaukee Police Department where he served 27 years, working his way up the ranks and retiring at the rank of captain in 2011. Zibolski held a variety of patrol, investigative and specialty unit commands. As deputy administrator for Wisconsin DOJ’s Division of Law Enforcement Services (2011-2015), Zibolski had operational responsibility of a statewide division that included training and standards for law enforcement.

Zibolski is a graduate of Northwestern’s School of Police Staff and Command #203, Police Executive Research Forum (PERF) Senior Management Institute for Police session #68, and is an International Association of Chiefs of Police (IACP) nationally certified Leadership in Police Organizations instructor. Zibolski holds a master’s degree in organizational management and leadership from Springfield College. 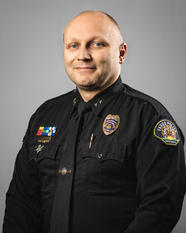 Stefonowicz was promoted to the rank of Sergeant in February of 2009. He supervised patrol officers in the Field Services Division and was in charge of the Training Division where he created a new monthly training program for our patrol officers allowing them to train during their work shifts in shorter intervals.

Stefonowicz was promoted to the rank of Assistant Chief on July 12, 2021. Stefonowicz serves as second in command and provides assistance to the Chief in development, administration, coordination and implementation of departmental policies, procedures and activities.

During his time at the Fargo Police Department, Stefonowicz has worked in various assignments. He has been a Police Training Officer, Firearms Instructor, Defensive Tactics Instructor, Active Shooter Instructor and E.V.O.C. Instructor. He has served on the Chief’s Advisory Committee and the Chief’s Selection Committee in 2015. Stefonowicz served on the Red River Regional SWAT team for 9 years, and served as an Operator, Basic Training Instructor and a Team Leader during his service on the SWAT team.

Stefonowicz has served as a Physical Fitness and Response to Critical Incidents Instructor and a board member on the Advisory Committee for the Lake Region State College Police Basic Program. Stefonowicz implemented the department's
Fargo Police Academy enabling the department to efficiently hire and train new police officers.

Stefonowicz has been recognized as an employee who performed an act worthy of recognition; Top Gun during SWAT Basic Training; two Combat Cross award; Fargo Police Officer of the Year; North Dakota Law Enforcement Officer of the Year; the Service Award for service and dedication as a PTO and SWAT Team member in 2008, 2009 and 2013; the Chief’s Medal; and a letter of commendation for distinguishing himself with an act that exemplifies the goals, values and mission of the department. Stefonowicz was recognized as Supervisor of the Year for 2020.

Stefonowicz received his bachelor’s degree in business administration with an emphasis in human resources through Rasmussen College, and an associate of arts degree from North Dakota State College of Science. Stefonowicz is a graduate of the 277th class of the FBI National Academy. 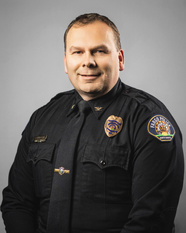 Deputy Chief Joseph Anderson has been employed with the Fargo Police Department since January of 1997. Prior to working for the Fargo Police Department, Anderson worked as a Reserve Deputy for the Cass County Sheriff’s Office for two years. Anderson was promoted to the rank of Sergeant in October 2002. As a Sergeant, Anderson supervised Patrol and the Criminal Investigations Unit. He also served as the Office of Professional Affairs Supervisor. Anderson was promoted to the rank of Lieutenant in January 2011 and served as the District Commander of Field Services and the Traffic Safety Unit. Anderson was promoted to the rank of Deputy Chief in December 2014. Prior to the department restructure in 2021, Anderson has experience commanding the department's Field Services, Administrative Services, Investigative Division and Neighborhood Services Division. Anderson currently oversees the Professional Standards Division.

Anderson initiated the creation of the Fargo Police Department's Mentoring Program, selected the committee and provided guidance and vision to the implementation of this program. Anderson also redefined the roles and responsibilities of the Crime Analyst position and the weekly Intelligence Lead Policing meetings. 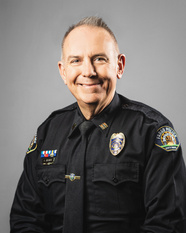 Captain Chris Helmick has been employed with the Fargo Police Department since December 2001. Helmick served as a Patrol Officer until 2009, with secondary duties as a Crime Scene Investigator, Bike Officer and Police Training Officer. He has been a Police Instructor since 2004. Helmick was promoted to the rank of Sergeant in 2009 where he supervised patrol officers and was the PTO coordinator and Mobile Field Force Instructor. He was promoted to the rank of Lieutenant in January 2016 and oversaw the PTO program, Crowd Management Team, Restructuring Committee, Evaluation Committee, iPhone implementation plan and initial FPD Airport operations. Helmick most recently oversaw the Criminal Investigations Division. Helmick was promoted to the rank of Captain in July 2021. Helmick oversees the operations of Neighborhood Services.

Helmick was instrumental in the administration of the Police Training Program since 2008 by overseeing and implementing several changes and improvements to the program.

Helmick has also been involved in the department’s Crowd Management Team, developing the Department’s response procedures to civil unrest since 2002.

Helmick has been awarded Supervisor of the Year in 2018, the Combat Cross award in 2004, the Distinguished Service award for PTO, the Emergency Service Unit Citation for participation in the 2009 flood and the 2016 DAPL protests, a Commendable Performance Certificate for apprehending a homicide suspect in 2004, and has received various Letters of Recognition.

Captain George Vinson has been employed with the Fargo Police Department since January 2004. Vinson became a K-9 handler in 2007. Vinson and K-9 Earl served as a Narcotic Detective prior to his promotion to the rank of Sergeant in February 2011 where he oversaw the day shift and School Resource Officers. He was promoted to the rank of Lieutenant in July 2016. As a Lieutenant, Vinson oversaw the Community Engagement Team, the juvenile diversion program, the Police Explorers Post, and was responsible for the department’s grant applications and progress reporting, and most recently the Professional Accountability Division. Vinson was promoted to the rank of Captain in July 2021, and currently oversees the Criminal Investigations Division.

During his time with the department, he has worked various assignments including K9, PTO, Defensive Tactics Instructor, Crime Scene Investigator, Emergency Preparedness Coordinator, and served as the police awards committee chair.

Vinson has been instrumental in creating programs that help benefit the overall moral of the department. Vinson created a Critical Reflection Questionnaire for officers to provide a unique way to open the lines of communication between staff and supervisory staff, providing a better working relationship. Vinson also was the first to implement the 360 Degree Evaluation for our department. This allowed officers a chance to anonymously provide feedback.

Vinson has been awarded the Life Saving Award, Emergency Service Unit Citation (twice), Police Service Award for K-9 Handler (twice) and a Commendable Service Award. Vinson and his partner K-9 Earl have received numerous awards due to his proficiency in drug detection. In October 2019, Vinson was recognized by the International Association of Chiefs of Police as representing the top 40 rising leaders under 40 years old “from around the globe exemplifying leadership, dedication and service to their communities and the law enforcement profession.”

Vinson has a Bachelor of Science degree in Criminal Justice and Sociology, and a Master of Arts degree in Public Safety and Law Enforcement Leadership. Vinson has attended police leadership courses including Minnesota Bureau of Criminal Apprehension’s 14 course Leadership Program, FBI LEEDA leadership training and IACP’s Leadership in Police Organizations.