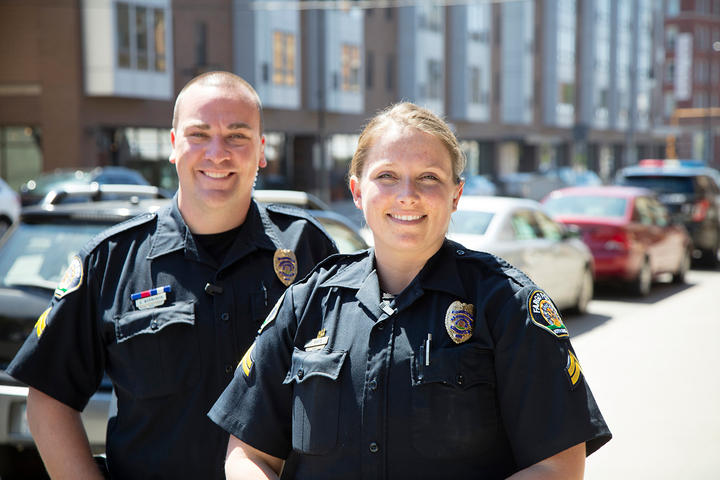 The Fargo Police Department has two officers specifically assigned to provide enhanced police services to the downtown area. This officer is called a Downtown Resource Officers (DRO). The DRO's job is to help promote a revitalized, safe and clean downtown that will appeal to citizens and visitors.

The Downtown Community Partnership (DCP) is an organization established to ensure the future of a healthy downtown neighborhood that will serve as a base for Fargo's continued growth and prosperity. The DCP dedicates its work toward a vital and vibrant city center that will not only be an asset to citizens of Fargo, but also to the businesses that serve them. The DCP believes that for a downtown to be truly great, it must be maintained and marketed by an effective, imaginative and energetic collaboration of local interests. The DROs maintain regular contact with the DCP.

Through the Case Management Program, the Fargo Police Department helps coordinate and integrate community services for vulnerable adults. The program incorporates social services, the criminal justice system and the community in an attempt to improve individuals' quality of life and to create a safer environment downtown. The DROs chair the monthly meetings of the Case Management Committee.

All officers assigned to the downtown area focus their attention on violations of law that affect the quality of life for people living, working and visiting there. Some particular areas of concern are consuming alcohol in public, panhandling, criminal trespass, and urinating in public. The DROs and other downtown officers are active on bicycle and foot patrols, which help them achieve enforcement objectives.

All officers assigned to the downtown area closely monitor any active or potential transient camp activity. The DROs and other downtown officers frequently patrol areas known for transient activity, particularly beneath downtown bridges, along the Red River and near the Burlington Northern rail line.

Downtown Resource Officer Jesseca White developed the Downtown Community Work Program. The program was started to keep repeat offenders from serving time in jail for extended periods of time for minor offenses such as consuming in public, urinating, panhandling or trespassing because they weren’t paying their fines and ultimately costing the City of Fargo money.

A typical encounter with a repeat offender occurs with an officer issuing a citation with a court date, a failure to appear by the offender which results in a warrant, a court appearance and then either a sentence or fine to repeat the process again; the revolving door.

In between offenses, offenders were continuing to drink and cause problems for officers and the
public.  The goals of the program are to disrupt the revolving door and to get this population re-engaged in the community they live in through community service while also connecting them with services they may not be actively engaged in such as housing, chemical dependency rehabilitation, personal health and mental health care.

Participants complete community service projects for the city which range from picking up trash, setting up for events, or helping at local shelters and facilities.  The group meets two times a week and works for around three hours at a time.  Officer White worked with Municipal Court, City Prosecutor, Defense Prosecutors, the City of Fargo, and the Homeless Outreach Coordinator to come up with a system where participants are assigned to the work program and given a monetary fine or hours of service and allowed to work off the fines.

The department has seen a 50% recidivism rate for those in the program and the majority of them were housed, were in the housing process, or remained housed.  Several of the participants entered rehab during the short time the program has been running.  The program has cut police involvement with these individuals down significantly and we have fostered a better relationship with them because of it.