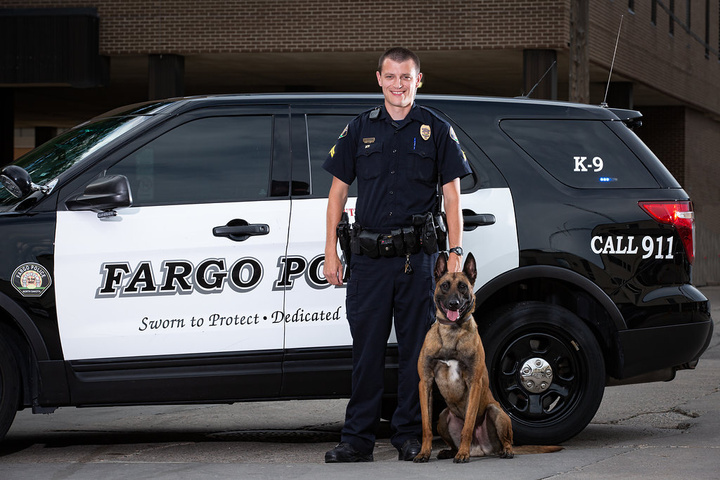 The Fargo Police Department has three dogs assigned to its Canine unit. The use of police canines helps keep officers out of danger and can even reduce the chance of serious injury to suspects in certain situations. Sometimes offenders try to hide from officers in places where a canine is much more efficient in finding them. Some of these offenders are very dangerous and may be armed. The use of the canines helps reduce the danger for officers during apprehension efforts. The canines may also allow officers to avoid using higher levels of force, including deadly force, to take offenders into custody.

Fargo's Canine units are increasingly valuable in the battle against drug use. They are particularly helpful in locating easily concealed drugs, such as methamphetamine. Besides assisting narcotics officers, the canines are very effective in searching vehicles and schools, tracking suspects and performing a variety of other tasks.

The Canine officers and their partners receive their initial training out of state. The training consists of many weeks away from home learning to work with their new partners and learning the new tasks they will perform. They then have to receive yearly certification through the United States Police Canine Association (USPCA) to to be eligible to work the streets. They also have to attend a multiple week narcotics certification course out of state as well. Nitro and Earl are certified and have their narcotics certification.

Canines in the Community

In addition to law enforcement duties, the canine units are very popular at public events, such as the Fargo Police Community Picnic, Boy Scout meetings, Neighborhood Block Parties and many other events. Introducing the police canines to the public is a great way to develop rapport, especially with children. In our growing city, the need for canine officers and their partners will only continue to increase. 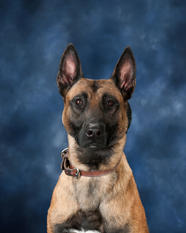 K9 Blue is a Belgian Malinois born April 28, 2016 in Slovakia. Blue was purchased and trained by Shallow Creek Kennels in Sharpesville, PA. In June of 2017, Blue was purchased by the Fargo Police Department and paired with his handler, Officer Sam Bollman. Officer Bollman and K9 Blue completed training in August of 2017.

K9 Blue is trained in narcotics detection and patrol work, which consists of tracking, criminal apprehension, and evidence recovery. As of December of 2018, K9 Blue has been deployed over 325 times to locate narcotics, evidence, or an individual. Officer Bollmand and K9 Blue also enjoy giving public demonstrations to school classes, businesses, and organizations in the community. 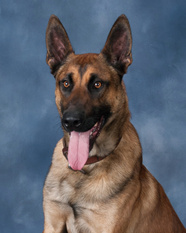 K9 Uno is a Belgian Malinois born on January 1, 2017 in Saint-Saulve, France. Uno was purchased by a vendor in the Netherlands, where he was trained for police work. Uno was eventually sold to Shallow Creek Kennels in Sharpsville, Pennsylvania. While at Shallow Creek Kennels, Uno spent six weeks learning narcotic detection, tracking, apprehension, building searches, area searches, and evidence recovery. Uno was paired with his handler, Officer Brad Cernik in March 2018. Together, the team completed another six weeks of training out in Pennsylvania. Officer Cernik and Uno returned to Fargo and started working the street together May 1, 2018.

During his free time, Uno enjoys playing fetch in the backyard, chewing on his bone, and laying around the house. 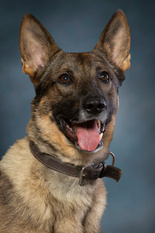 K9 Kilo is a Belgian Malinois/German Shepherd Dog mix born in Slovakia in January 2017. In January of 2018, Kilo was purchased by the Fargo Police Department from Performance Kennels, a Police K9 vendor in Buffalo, Minnesota. Kilo was paired with his handler, Detective Bret Witte, in January of 2018. In March 2018, Kilo and Detective Witte completed their four week narcotics detection class taught by Performance Kennels.

K9 Kilo is a single purpose dog trained in narcotic detection. Kilo is certified through the United States Police Canine Association (USPCA). Kilo is trained on the odors of marijuana, methamphetamine, heroin, cocaine, and ecstasy.

K9 Kilo has earned multiple trophies and medallions in the course of his narcotics detection career. Some of Kilo’s more significant finds include pound or multiple pound seizures of methamphetamine, cocaine, and marijuana.

K9 Kilo lives at home with Detective Witte and in his spare time enjoys walks to the park and playing with his pet mates Coco and Chewy. K9 Kilo’s favorite toy is his Kong ball and lives by the motto “ball is life”. 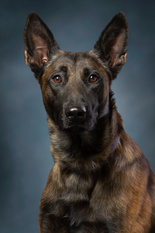 K9 Toby is a Belgian Malinois born on May 12th, 2018 in the Czech Republic. Toby was trained at and purchased from Shallow Creek Kennels, Sharpsville PA, in partnership with the Fargodome. In February of 2020 Toby was paired with his handler, Officer Jennifer Gustafson. They completed their training in April of 2020.

K9 Toby is trained in explosive ordinance detection (EOD), otherwise known as a bomb dog, and patrol work. He is one of two police bomb dogs in North Dakota. Toby is trained on approx. 20 explosive odors including homemade explosives (HME). On the patrol side, K9 Toby is trained in tracking, area searches, building searches, and apprehension. Having the capability of a bomb dog is new to Fargo and Toby and his handler are excited to serve the community by being present at community events and assisting fellow law enforcement agencies, both local and federal, with investigations and security details.