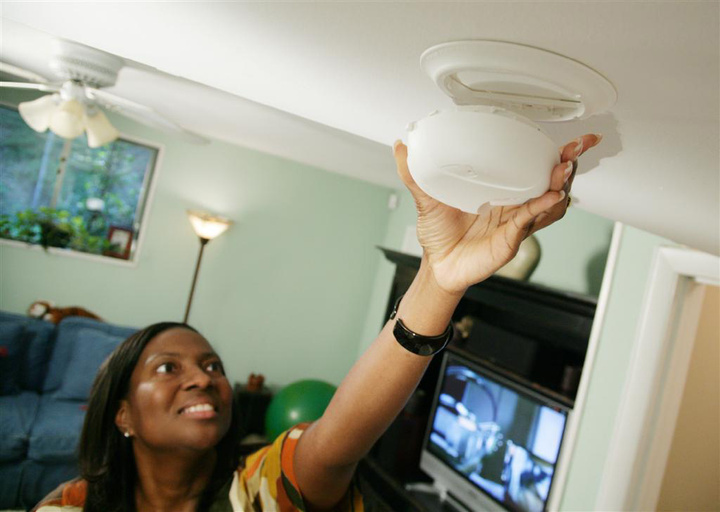 Smoke alarms are required in all residences.

How effective are smoke detectors?

Should I replace my smoke detector?

Smoke detectors that are 10 years old are near the end of their service life and should be replaced. A smoke detector monitors the air 24 hours a day. At the end of 10 years, it has gone through over 3.5 million monitoring cycles. After this much use, components may become less reliable. This means that as the detector gets older, the potential of failing to detect a fire increases. Replacing them after 10 years reduces this possibility.

My detectors are wired into my electrical system. Do I need to replace them as often as battery-operated detectors?

Yes. Both types of detectors are equally affected by age.

How many detectors should I have?

The average-sized home or apartment needs more than one smoke detector. The exact number depends on the number of levels in the home and the number of bedrooms. National fire safety standards recommend a minimum of one detector on each level of the home, one detector outside the bedroom area, and one in each bedroom. The detector that is placed outside of the bedroom area should be installed in a place where it can be heard at night through a closed bedroom door.

Is there more than one type of smoke detector, and what is the difference?

There are two type of smoke detectors for homes. One type is called an ionization detector because it monitors "ions," or electrically charged particles. Smoke particles entering the sensing chamber change the electrical balance of the air. The detector's horn will sound when the change in electrical balance reaches a preset level. The other type of detector is called photoelectric because its sensing chamber uses a beam of light and a light sensor. Smoke particles entering the chamber change the amount of light that reaches the light sensor. The detector sounds when the smoke density reaches a preset level.

Is one type better than the other?

What is more important, the type of detector or the number?

The number of detectors is more important than the type. Installing several smoke detectors of each type will provide better coverage in the extreme cases of long-term smoldering or fast-flaming fires. But since both types respond in time for you to escape, the most important thing is to install enough detectors in the proper locations. Detectors are available with both types of sensors in the same unit, but they are more expensive than models with a single sensor. If the choice is between having only one of each type or having more of the same type, more detectors is the better choice.

My detector goes off when I cook. How can I stop this?

Smoke detectors are designed to be very sensitive so they will alert occupants to a fire in time for them to escape. If a detector regularly responds to smoke from cooking, there are several options for handling this problem. One way is to replace the detector with one that has a button that silences it for a few minutes. Another way is to move the detector farther away, giving the smoke a chance to dissipate. Moving a ceiling-mounted detector to a wall can also reduce nuisance alarms. However, this will also make it a little slower to respond to a real fire. If the detector is the ionization type, another option is to replace it with a photoelectric. This detector is less sensitive to smaller smoke particles and thus is less affected by cooking smoke.

How can I test my detector?

Every smoke detector comes with a test button. We recommend that people test their detectors regularly, at least once a month.

Should I use real smoke to test my detectors?

This is not recommended because the burning objects used to create the smoke might cause a fire. Some stores sell pressurized cans of simulated smoke for this purpose. When using this product, follow the operating instructions and do not get the can too close to the detector. This prevents the smoke from coating the detector's sensing chamber, which can make the detector inoperable.

How important is it to clean my detector?

Cleaning is easy. Just vacuum the detector at least once a year. This will keep the openings to the sensing chamber free of dust, residue from cooking vapors and insects.

What about changing batteries?

Smoke detector batteries should last at least one year under normal conditions. The biggest reason that smoke detectors don't work is because people remove the batteries, (e.g., to stop the low battery signal or a nuisance alarm) and forget to replace them. When a battery reaches the end of its service life, the detector will give a short beep every minute or so. It is easy to remove the battery and then forget to replace it. The best way to prevent this is to replace batteries at the same time each year before the low battery signal begins.

Is your home in need of smoke alarms?