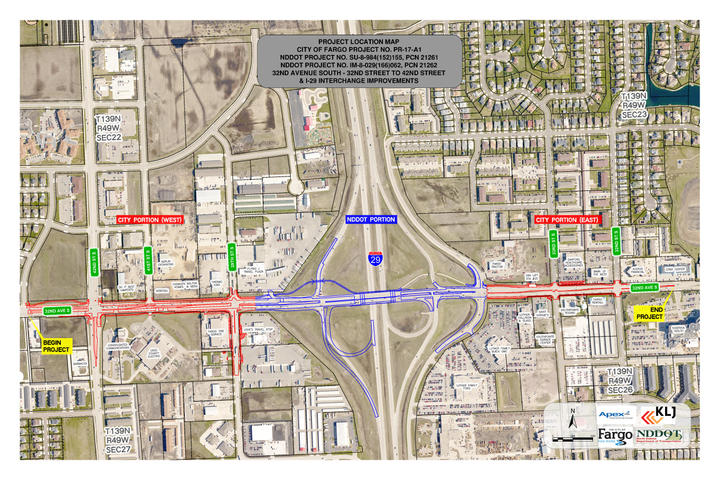 Beginning Monday, March 15th, weather permitting, the City of Fargo and North Dakota Department of Transportation began a joint project reconstructing the roadway along 32nd Avenue between 32 Street S and 43rd Street S, including the Interstate 29 (I-29) bridge.

The purpose of this project between the City of Fargo and North Dakota Department of Transportation is to replace pavement along 32nd Ave. S through the work zone and improve access to and from I-29. It will upgrade operations and reduce delays along the corridor by widening the road for added capacity and improving safety for both motorized and non-motorized modes of transportation.

The stretch of roadway will be widened to six lanes and include double, westbound left turn lanes at 42nd Street. There will also be several ¾ access intersections for improved safety, a new southbound I-29 eastbound loop ramp in the southwest quadrant of the interchange, and a pedestrian underpass on the north side. Utilities, traffic signals and street lights will also be updated, as well as additional improvements.

As Fargo and its surrounding communities continue to grow, FargoStreets has been widening corridors to keep up with the population boom the city has experienced over the last two decades. Existing section line roads were originally built to four lanes near Fargo’s interstates and in growths.

In addition to capacity improvements, the project will also address major surface and access issues throughout this busy stretch that have developed as more drivers use the road.

Drivers, residents and businesses in the area will most likely experience temporary traffic delays during peak travel hours (7AM – 9AM and 4PM – 6PM). As the project progresses, there will also be traffic shifts, temporary lane and intersection closures, and possibly short-term interstate access impacts. There will always be at least one lane of traffic in each direction open on 32nd Avenue throughout the project, and drivers will always be able to exit onto 32nd Avenue from the interstate. All access to properties and businesses will be maintained throughout the project, and drivers and pedestrians are encouraged to utilize side streets or alternate routes when possible.

This project began on March 13th and is scheduled to be substantially complete by the end of October 2017.

All residential and business properties will receive a special assessment. The properties that fall into this project’s special assessment district/improvement district are neighborhoods between I-94 and 35th Avenue S from 28th Street S to 45th Street S. Fargoparcels.com is a good resource to view the current estimates for your property. The estimate will change once the project is bid, built and accepted as final. This project was bid on Feb 3rd.

Special assessments are payable over 25 years with interest and applied the year after the project is complete. The project is being funded by a combination of federal transportation funds, infrastructure funds and sales tax (water and sewer utilities), and special assessments (local). The estimated construction cost is approximately $19.6M ($12.3M Fed/$1.1M State/$6.2M Local).