Wastewater entering the facility is about 99.9% water. Residential wastewater flows account for 97%, while industrial wastewater flow accounts for the rest. Our average daily flow in 2016 was 12.04 million gallons per day.

The wastewater is then disinfected using ultra violet light while the solids are dried in either the drying beds or the belt filter press. The treated wastewater is then sent directly to the Red River or to stabilization ponds; the ponds are used if the level of the river is above 20 feet or if the wastewater needs to undergo further treatment. The dried biosolids are sent to the landfill. The total biosolids production for 2016 was 2,977 dry metric tons.

The wastewater continues on to seven primary clarifiers, which are large circular tanks with a water depth of eight to nine feet. The wastewater enters through a pipe in the center of the tank and flows across the tank, which reduces its velocity, allowing the solids to settle to the bottom. The settled solids are collected by rotating scraper blades and deposited into a hopper. They are then pumped to the anaerobic digesters. Floating materials, grease and oil are also captured in the clarifier. A skimmer arm collects these materials, which are also transferred to the digesters. The wastewater flows over the weirs in the primary clarifiers and into the filter lift station where four pumps will send it on to three rotating distributor BOD trickling filters. The term BOD (Biochemical Oxygen Demand) is the rate at which microorganisms use the oxygen in water or wastewater while stabilizing decomposable organic matter under aerobic conditions.

The BOD trickling filters treat the wastewater biologically. Distributors spray the wastewater onto synthetic media stacked to a depth of 15 feet in the tanks. The large surface area of the synthetic media provides a place for the aerobic bacteria to grow, producing a slime of gelatin mass called a zoogleal film. The organisms in the film feed on the suspended material in the wastewater, breaking it down to gasses, water and inert material. Airways under the synthetic media allow airflow up through the media and provide oxygen for the bacteria. After these growths become large and slough off, they settle out in the intermediate clarifiers and are returned to the influent lift station. The wastewater goes to the filter station where four pumps send it to two rotating nitrification trickling filters.

The two nitrification filters operate on the same principle as the BOD filters, but remove ammonia and organic nitrogen because all the carbonaceous material has been previously removed from the wastewater in the BOD filters. A different species of bacteria uses the ammonia and organic nitrogen for its food source. The wastewater then passes through a final clarifier that allows any material that sloughs off in the nitrification filters to settle out and be returned to the influent lift station.

The facility uses mechanical and biological treatment to remove organic and inorganic suspended and settleable solids in the wastewater. Chemicals are used for odor control and the biosolid de-watering operation. The biological process that treats the sewage uses bacteria that are either aerobic or anaerobic. Aerobic bacteria require atmospheric oxygen to live and reproduce. Anaerobic bacteria obtain their oxygen from the material they are digesting and do not need atmospheric oxygen.

Wastewater enters the influent pumping station through bar racks with a one inch opening to remove large objects such as rags, wood, brick, and other items that may cause plugging or damage to the pumps. The racks are automatically cleaned by rakes that remove the material for disposal at the City of Fargo landfill.

The wastewater is pumped to a vortex grit removal unit that separates heavy material such as rocks, grave, and sand—these are also taken to the City of Fargo landfill. The wastewater then passes through two pre-aeration channels where air is pumped through diffusers in the channel to add oxygen to the wastewater and help keep organic material in suspension.

The wastewater then goes into a chamber where ultra violet light is used for disinfection before the effluent is discharged to the Red River. The City of Fargo discharge permit requires that effluent from the plant must be disinfected from April 1 to October 31.

The facility also has an effluent lift station that pumps the effluent to six waste stabilization ponds whenever the river is in a flooded condition (above 20’ river stage). The waste stabilization ponds can also be used to provide additional tertiary treatment to meet state discharge limits when necessary. The total holding capacity of the ponds is about 1.6 billion gallons and provides continued treatment of the effluent before being discharged to the Red River.

The BOD test is used to measure the quality of wastewater and is one of the limits included in the city’s discharge permit. The BOD of domestic raw sewage coming into the plant is normally between 200 mg/L and 250 mg/L. Typical effluent discharged from the Fargo waste stabilization pond or plant has a BOD of 10-15 mg/L. The BOD permit discharge limit for Fargo is 25 mg/L for a 30-consecutive-day period. Other discharge requirements the City of Fargo must meet are pH, total suspended solids, oil and grease, chlorine, ammonia as nitrogen and fecal coliforms.

Solids that settle to the bottom of the primary clarifier are pumped to three anaerobic digesters where they are mixed and circulated through heat exchangers, which raise the solids temperature to 95° F. Anaerobic bacteria in the digesters break down the organic solids into more stable compounds and produce a gas that is about 65% methane. The process reduces the water volume of the sludge and reduces the putricibile (liable to become putrid) organic matter to relatively stable, or inert organic matter, from which water can be easily separated. The methane gas being produced is used for heating the digester sludge, administration building and garage. The gas is stored in secondary tanks with floating covers. The supernate from the digesters is transferred from the digesters to the secondary tanks and is held until it can be pumped to the sludge drying beds or the belt filter presses for drying.

From May to November, the sludge drying beds are filled by pumping the biosolids (digested sludge supernate) onto the beds. The beds allow the water to drain through the sand and return back to the plant. Evaporation completes the drying process. The dried biosolids are then removed and hauled to the City of Fargo Landfill for daily cover.

A site plan of the Fargo Wastewater Treatment facility is shown below. 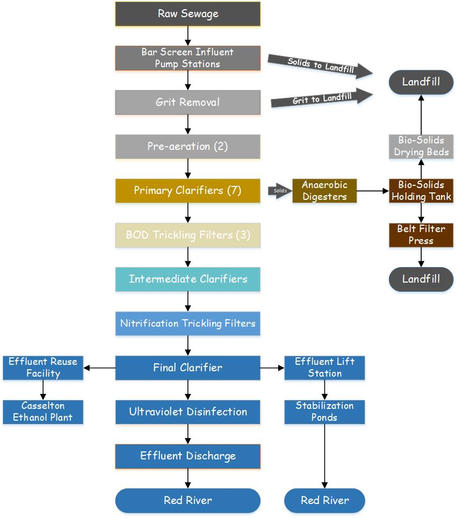 The City of Fargo is authorized to discharge to the Red River under NPDES permit No. ND-0022870.

The effluent from the Wastewater Treatment Plant shall, as a minimum, meet the limitations listed in the permit. The local limits for discharges into the sewer system are listed in Chapter 17–0203 of the Fargo Municipal Code. 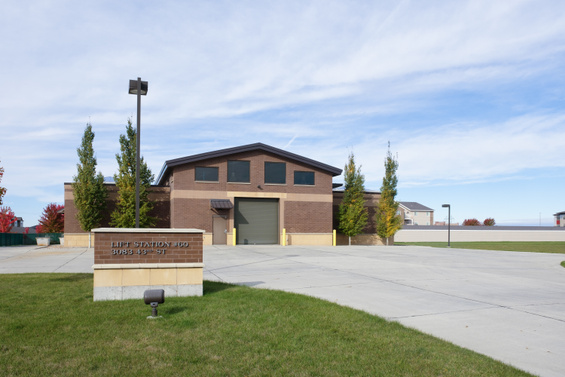 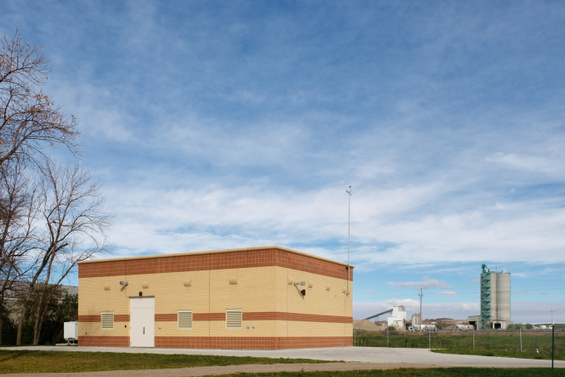 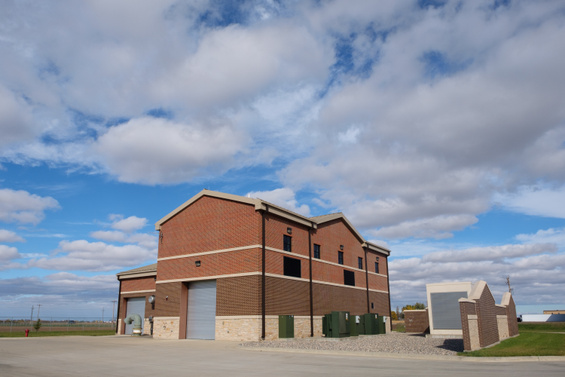