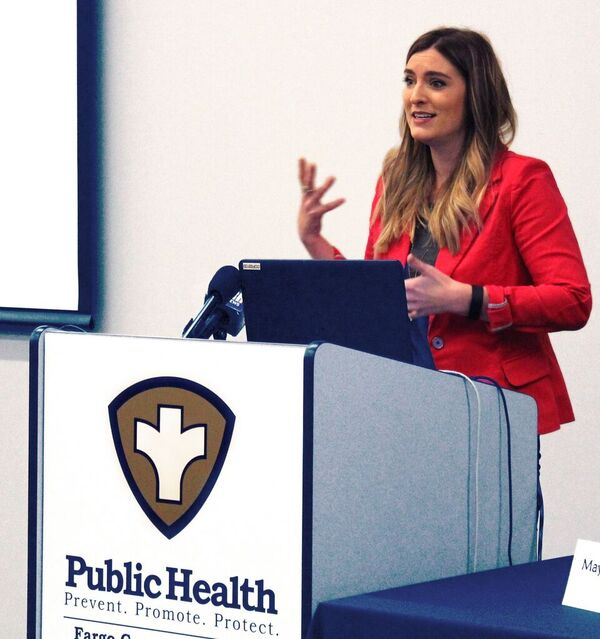 Kate Bjorklund was relieved she was able to nourish her babies through breastfeeding and she was very happy it provided valuable bonding time with her two children. Initially she set a goal of breastfeeding for six months. When she met her first goal, she set another one to continue for a full year. The one year mark is important because the American Academy of Pediatrics recommends breastfeeding exclusively for six months and continuing to breastfeed along with the addition of complementary foods for the first year of a baby’s life.

Breastfeeding is slightly easier during maternity leave when a new mother spends the majority of her days and nights with her baby. It is more challenging when a mother finds herself in public looking for a place to breastfeed or pump. North Dakota law states women can breastfeed anywhere they are legally allowed to be as long as they do so in a discreet or modest manner. Despite the law being supportive of mothers, finding a comfortable place to breastfeed or pump in public places can still be a major challenge.

Bjorklund says she pumped an estimated 2,100 times in one year to feed her son, Jack. She reports pumping at a variety of locations including vehicles, airports, churches, and bathrooms. “You name it, I’ve probably pumped there,” she says with a laugh. Each time she had to find a place to pump, a series of questions raced through her mind. “Will there be a bathroom and is the bathroom going to have a plugin so I can actually plug my pump in? If there’s no plugin, is my battery pack going to work? Do I have extra batteries with me? If I don’t, is there going to be a plugin near the sink? Are people going to walk in on me when I’m pumping? Is my shirt long enough so I’m going to be able to be discreet while pumping in a bathroom? Are people going to ask me questions? Are they going to judge me?”

Searching for a private spot to pump or feed can certainly be stressful. “As a new mom, the anxiety of just having enough milk to feed your infant for a year is a lot, let alone having that additional anxiety about where you’re going to pump,” explains Bjorklund.

She says she’s grateful to Discovery Benefits for providing her the opportunity to meet her goal of breastfeeding for a full year. Bjorklund says she hopes other employers see the value in being designated an Infant Friendly Workplace and choose to do it for the new moms who are heading back to work. “Having a safe and comfortable place to go pump for a new mom is so huge. It relieves so much anxiety and stress during an already stressful transition for a new mom.”